April 11th, I headed to the airport around 6:30 am to fly into Ft. Lauderdale for a new adventure. The anticipation had been building for two months now and it was finally the day that I would be embarking on Royal Caribbean’s: Independence of the Seas for my first cruise experience. I did not know what to expect, but I was excited and absolutely thrilled to be taking my first trip of the year.  I planned the trip for my mom and, I just hoped for the best. I knew that I would find something on board to do, but I wasn’t sure that she would have a good time. She did though, she really did!

Day One: My flight into Ft Lauderdale was for 9 am and within 35 minutes I was in Florida. I decided to get a Lyft. However, after 10 minutes had passed since the “supposed” arrival time, I went back inside the airport to “catch wifi”, only to find out that my ride had been cancelled. I chose another Lyft and made sure I stayed connected to the wifi until my ride came. Ya girl did not get a data plan. I already had purchased wifi for my cruise and didn’t see the need. Side note: For the 4 days, the wifi plan was $40. That’s right, wifi is not included. The ride to the ferry terminal was a little under 10 minutes. Y’all know excited?! The check in process was a breeze. They scanned our sea passes, we went through security, took a photo and waited about 15 minutes before boarding the ship. By 11:00 am we were abroad and were told that our staterooms would be ready for 1 pm. With a little under two hours to burn, like almost everyone else, we decided that it was time to eat. To the Windjammer Buffet we went. The restaurant was scheduled to open at  11:30 am, but that was not the case. It was the only  restaurant open at the time and the line grew and grew, all the way out to the pools. There were no staff in sight and an announcement was not made. We were just standing there in hopes of eating soon. I was literally starving. At 12 pm, Windjammer opened and I let out a sigh of relief. As I entered, I saw sinks and hand sanitizing stations. Two of the staff members were singing the famous “Wash your hands” song while dancing and playing the guitar. I’d never experienced that at a restaurant and I thought it was a nice touch (you know considering thousands of people on a ship for a few days and the possibility of so much germs). The lines were long, the food wasn’t good, but I had to eat something. I was grabbing anything that looked appetizing. I got a vanilla mousse, cookies, a burger, fried chicken and some other things. I wasn’t pleased with this dining experience at all. My cruise was not off to a good start. However, I didn’t think much of it though. Just some kinks that needed to be worked out, I hoped.

After lunch, we went in search of our stateroom. We were on the second deck in the middle of the ship. The thing here though, is that, rooms in the middle of the ship on Decks 2 and 3 have to be accessed from the 4th deck back elevator. So yes, we went from Deck 2, up to Deck 4, walked across the casino floor to the Aft then back down to Deck 2. That definitely took some learning. My mommy figured it out by Day 3, lol.

The room was an Outside View stateroom and it was quaint, but so cute. It had everything you would need in a small little package, almost like a tiny home kinda vibe. I set up the wifi on my phone and lounged in bed for about an hour, listening to music. Justin Bieber’s Baby   played in the air and I was in nostalgic bliss, until it was time to leave for the Muster. If you haven’t been on a cruise before, you may not know what a muster is. A muster is a mandatory safety exercise used to educate persons about what to do if there’s an emergency while aboard the ship. Thankfully, we did not have to put that teaching into practice.

After the muster, we went up to Deck 11 to watch the ship set sail. Thirty minutes later, we were watching the Welcome Parade. Staff members dressed as Greek gods and goddesses strolled around the Royal Promenade building excitement for the days to come. The parade was done and it was time to get ready for dinner. I was looking forward to this experience because the menu looked delicious. I already knew what I was going to order.  I ordered the crab cake, horseradish crusted salmon and a creme brulee. Everything was BOMB! If my meals were this great going forward, I knew I’d be living! 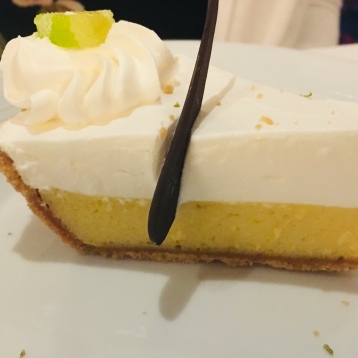 The night ended at a comedy show. I didn’t think the comedian was funny but it was a nice ending to a wonderful day. We finally went to bed around 1 am, anticipating the new adventures we would have.